Mostly Printed CNC, also known as the MPCNC, is considered among the best CNC routers and is quite different from a normal CNC kit you’ll find on the market.

V1 Engineering has made it, and they have constructed this CNC for users that want to have customization options in their router.

Those people who do DIY projects and want to have a bit of insight into how things work and the tech behind it are perfect for them. So, we’ll go deep into finding out what exactly the machine does and how it operates. 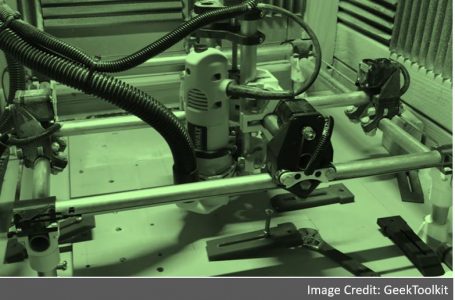 An MPCNC is a CNC platform that is designed with easily sourced parts which are also very affordable. This was the intent behind manufacturing this, and it helped many people by providing access to an even greater customer base.

This has removed the need to purchase expensive machinery that is designed to complete a single function. With the MPCNC, you can easily perform almost all those functions that you normally require in any DIY task or for a small business related to subtractive and additive work.

Generally, you would find the use of an Arduino controller being involved in controlling the operation of these machines. It makes it convenient to make changes and adds a bit of versatility for the user.

For fast functioning and efficient results, an Arduino board is used in many CNC machines. You can also use Raspberry, Java, and other programming software for controlling these machines, depending on what’s preferred by the user.

If you have a bit of knowledge relating to CNC machines and their parts, you can effectively use them for various applications. So, we will discuss what goes into making this structure and some other important stuff relating to the MPCNC.

As per V1 Engineering, there is a build kit that they give out at a lower price. This includes the basic electronic parts, boards, and hardware that is needed for constructing the MPCNC. They don’t ship the conduit/rails in the package as it would be more expensive than sourcing it locally. 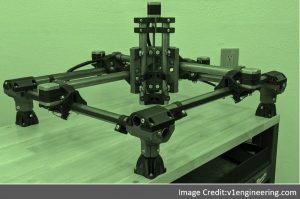 You would need a good 20 feet of conduit that connects all parts and basically acts as the frame of the MPCNC. This would normally cost about $8-$12, and it would probably jump to $65 if we’re talking about stainless steel tubing for extra accuracy and sturdiness.

The starting size of this conduit is recommended to be 24” x 24”, which can be increased to larger dimensions later on, subject to compatibility with the outer span. Just keep in mind that the more compact the machine is, the easier it would be to push it quickly with precision.

Then it requires some plastic parts that are essential components of the MPCNC. You can use a 3D printer to make these parts based on the readily available designs on their website.

It will take 2 spools of filament to make these parts if you have a 3D printer; if you don’t, you could also purchase these parts from V1 Manufacturing’s website for $165. These parts include corners, belts, feet, and parts related to Z-axis and center assembly.

I would recommend making these parts on your own as they cost very little compared to the ready-made ones ($30-$35), but it would take you nearly 100 hours to make all the parts with the filament and printer.

The size of the MPCNC axes can be anything as per your preference. If you’re planning to go over 3.5” in length, it is advisable to install mid-span supports to help increase stability and sturdiness to the frame. The belt included in the kit is enough for a good 48 square inches (XY dimensions in any combination).

It would be preferable to keep the frame size smaller to increase accuracy and make it move swiftly. All the linear motion happens due to ball bearings that you could source pretty easily online or from your local hardware store.

So, how is the MPCNC powered? There are 2 stepper motors located at the X and Y axis each (4 in total). For the Z-axis, there is a single stepper motor. As mentioned above, the stepper motor included in the kit is NEMA 17, which is a standard for these machines. The torque can be anywhere near 42 OZ/in or maybe more.

Again, for making things on the less expensive side, the belts are of standard quality, which doesn’t compromise accuracy. The ballscrews are considered expensive, and they do need extra care, replacement, and frequent maintenance during the life of the MPCNC.

For controlling the machine, you can choose the control board of your choice. V1 Engineering recommends using UltiMachine boards to deliver better response times and have enhanced safety features. It is also wonderful to work with common Ramps 1.4 or other CNC boards like the GRBL and Marlin based boards.

The software used in the MPCNC is available on the internet, and you’ll come across plenty of cheap software options relating to CAM, CAD, and 3D Printing. It depends on what you are most comfortable using, which provides supports for the image files and is compatible with your desired OS. Suggested software includes ESTLCam, fusion 360, and Repetier-host.

You can easily assemble all these parts with basic tools. There would be no need for any pneumatic tools or any precision cuts.

As with a normal CNC machine, you can do plenty of stuff with it, which would generally include engraving, cutting, and 3D printing. Adjusting the lengths of the axes is the real plus point that allows users to increase the scale of their project to greater dimensions.

As technology has progressed, we now have access to 3D printers of different sizes and functions that allow users to create limitless objects. It uses spools of filament as the material for producing the item, which is basically plastic. These filaments are easily available online in a variety of colors and textures.

The plastic is melted through the 3D printer and is extruded out from a nozzle that moves in the direction required to make that product. It essentially prints one layer at a time, making it possible for it to dry up before moving on to the next layer. Either way, the plastic dries up quickly.

The final result of the printed product hugely depends on the 3D printer that you’re using. So, it can look like a roughly finished product with crude plastic lines stacked together or a stunning 3D model of the image that you’ve just processed. Also, the quality of filament used plays an important role in the final product.

So, you can use the MPCNC for 3D Printers as the design of the axes is suitable for it. As the double rail design is pretty large, creating a large XY print space is possible. The Z-axis should be limited to maybe under 1 foot if you’re looking for precision.

You would have to go for a firmware adjustment and a physical extruder as an addition to the MPCNC for using the 3D Printer. You can select the extruder on your own by referring to an online guide for it. For the firmware, visiting the website of V1 Engineering might benefit you a lot in this. 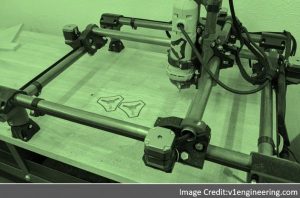 A Brief on the Mill

The most common of them all is the MPCNC mill build. It can give out great power and quality, more than what you can achieve with a normal CNC milling machine. The thing that limits the variation of the mill depends probably on the frequency of work.

If the MPCNC is built right with the correct materials and components, you would cut aluminum and possibly even steel with it.

You would have to make sure that the frame is tough as a rock, but at the same time, can move with precision. Again, the rigidity factor is prime in this situation, and the stress isn’t on the size of the MPCNC but rather the amount of effort it would take to create such a thing on a larger scale.

Therefore, experts have recommended limiting the size to 24” x 24” when starting with your first build.

The spindle used in the MPCNC is also an integral part of constructing the actual machine. Popular brands include Dewalt 660, but it is really your decision.

You can also compare different models concerning their toughness (and other extra features) when increasing or decreasing the scale of the MPCNC build.

Now we move on to the high-end of cutting, which is the plasma cutter. You can transform any desktop version of the plasma cutter into a precise machine with a little bit of firmware tweaking and some rewiring. 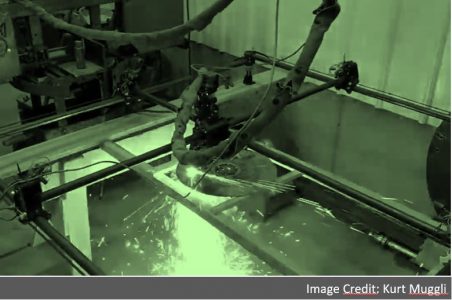 To work for this, there isn’t enough documentation present online in an orderly manner. So, you might have to dig deep to look for designs and technical specifications of parts that would be compatible with each other.

The plasma cutter would essentially be modified for the machine to control it. This involves software, safety features, and attachments.

On the V1 Engineering site, you could find The LowRider CNC as the recommended version for workplaces.

A laser engraver can be included in your MPCNC as an additional feature as the MPCNC itself is quite large, having ample space to accommodate these functions.

So, you can adjust the size of the engraver as per your needs. V1 Engineering also helps a lot in selecting the best option for this, so you can visit their site to get insight on what parts to make if you’re working with a laser.

Adding laser equipment to the MPCNC depends on the amount of work you’re going to do and its scale. You can select a laser engraver that ranges from anywhere between 2.5W to 10W.

Other Machines like the Plotter, PCB Etcher, and Vinyl Cutters

These other machines do not require much effort to implement the MPCNC build or even any CNC device in general.

They can be considered as a full-on machine or just an add-on, depending on the modification that has been made. For vinyl cutting and plotting, you would need to use a pen and drag knife, which are pretty simple tools.

As we’ve discussed at the start of the article, the MPCNC is a unique machine targeted towards an enthusiastic user. There are some other versions of CNC machines that can be considered as rivals of the MPCNC. You can find many other custom-made CNC machines online, but experienced users have rated the MPCNC to be the better product.

The design is pretty neat, and it looks sophisticated, especially when you use parts made of high-quality filaments. The overall accuracy and speed of the MPCNC are greatly improved, and it becomes easier to scale work up and down. We have seen how many options we have to experiment with the mechanical parts and frame design parts to make it work even better.

You can go on the V1 Engineering website to see what products they’re offering and the available packages. To build or purchase the MPCNC, it’s up to you. 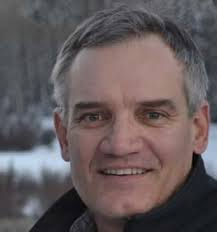 David Houghton
Construction Manager at Schlumberger
I am a content strategist and editor here at tools10.com. I have been working in Oil as well in the Construction Industry for years. The major projects I was involved in are Offshore Drilling and residential buildings. I have great hands-on experience in Tools & Machinery. Read More About Me

This site uses Akismet to reduce spam. Learn how your comment data is processed.